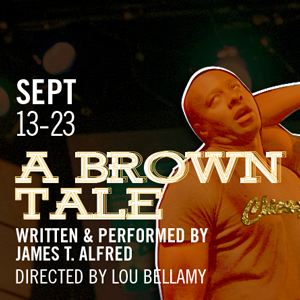 Opening Season 11: Redemption Song, OnQ presents A BROWN TALE, written and performed by James T. Alfred.  A tapestry of stories woven together creates this coming-of-age narrative which takes is on a journey through Alfred’s child hood to his adult life. Growing up on the south side of Chicago in public housing, Alfred explores the impact that community has on an individual’s personal development, commenting on a number of topics steeped in the community, such as public schools, Church and local commerce.

Playing over 20 different characters, James T. Alfred is a tour de force in this comedic one-man show. No stranger to the Charlotte stage, we last saw Mr. Alfred as MLK Jr. in The Mountaintop at Booth Playhouse in 2014. Audiences may also be familiar with his recent television appearances in FOX’s smash hit drama, Empire as Tyree, owner of “Ghetto Ass Studio,” and as Kenya Taylor in the STARZ original series, BOSS. A long time company member of Penumbra Theater Company, Alfred teams up with award winning PTC Founder, Lou Bellamy, who directs this critically acclaimed work. A BROWN TALE is a hilarious yet poignant piece of work that highlights a community’s shared humanity whose ethos and pathos are story-worthy.