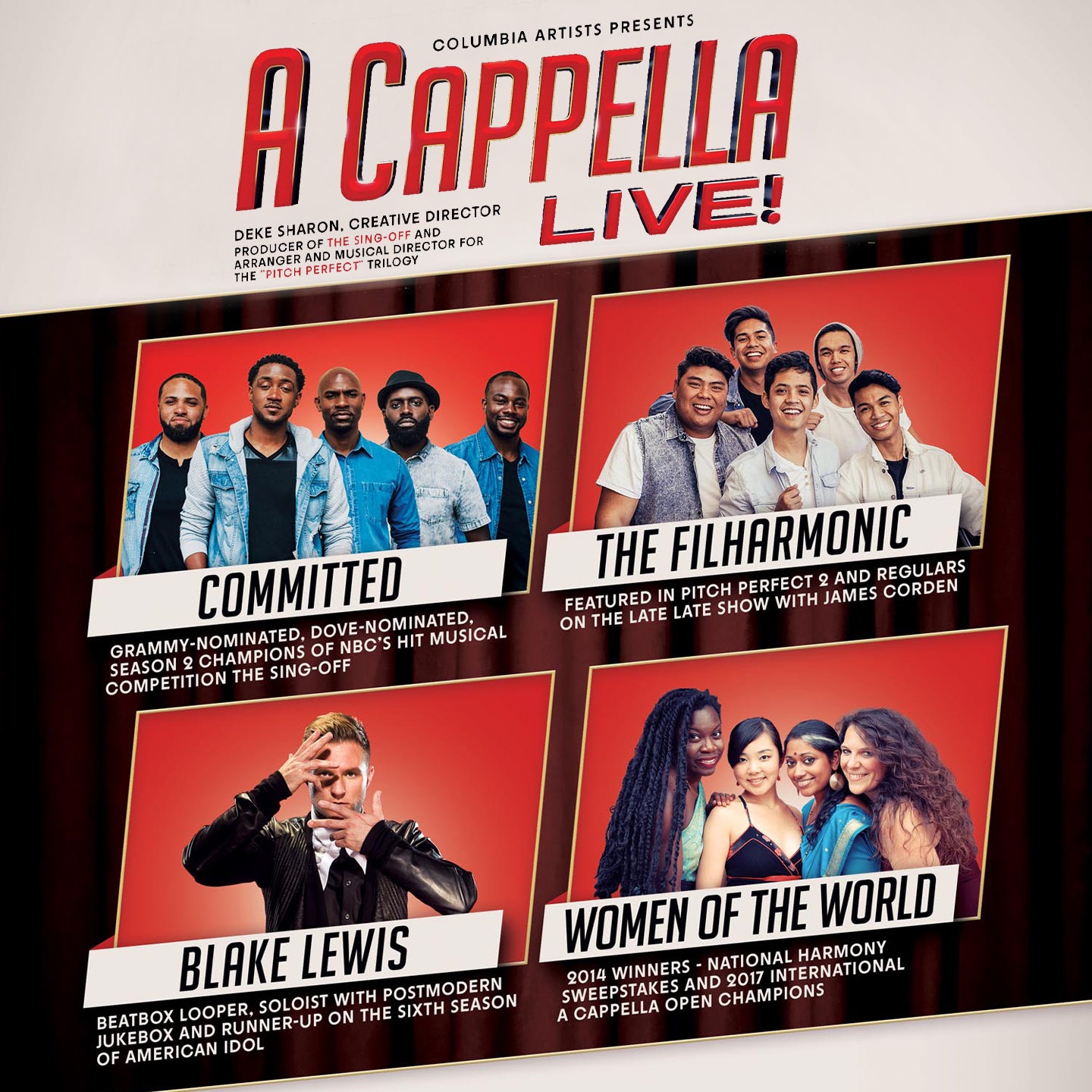 A Cappella Live is a show that is guaranteed to appeal to all ages, spanning a wide range of music with something new happening at each turn. A high-energy musical celebration of contemporary a cappella, conceived and arranged by Deke Sharon, vocal producer of Pitch Perfect and The Sing-Off, featuring four internationally recognized, award-winning, rising star ensembles.

COMMITTED is an a cappella group composed of six male vocalists from Huntsville, Alabama, all previously students at Oakwood University. The group won the second season of the musical competition The Sing-Off on NBC, performing a jaw-dropping arrangement of "We Are the Champions" from Queen. In 2011, Committed released their self-titled album, Committed, on Epic Records. Their 2015 Christmas album, Home for Christmas, earned the group a Grammy nomination for the rendition of "Do You Hear What I Hear."

THE FILHARMONIC, a Los Angeles-based a cappella group of Filipino-American youngsters who were featured in NBC’S hit musical competition, The Sing-Off, has much to sing about. The 5-piece vocal group made the semi-finals, joined The Sing-Off national tour, and were featured in the Universal Pictures hit movie, Pitch Perfect 2, then became a viral sensation after their Late Late Show appearances. In 2016, The Filharmonic brought their unique blend of hip hop, pop and 90’S nostalgia to more than 150 stages nationwide and was named the #1 college booked entertainment group of the year. Most recently they have opened for acts such as Fifth Harmony, Pentatonix, Future and Filipino super sensation Gary V. They consist of vocalists Vj Rosales, Joe Caigoy, Trace Gaynor, Vocal Bass Jules Cruz, And Beat Boxer Niko Del Rey.

BLAKE LEWIS first came to national attention as one of the most unique contestants ever to compete on American Idol, and long before that, as a teenager, he was well-known as "Bshorty" in Seattle's a cappella, hip-hop, and rave scenes. But with the release of his ambitious and completely independent third album, Portrait of a Chameleon, Blake is taking things to a whole new level.

WOMEN OF THE WORLD is an award-winning international a cappella quartet that performs original and traditional folk music with a contemporary twist, in 32 languages. The four singers represent Japan, Italy, India, and USA (by way of Haiti). Despite differences in their upbringing, language, religion, ethnicity, food, and music, they are bound by one unique desire: to explore sounds, rhythms, and musical vocabulary from all over the world. Since 2008, Women of the World has journeyed through the music of Africa, South America, Asia and Europe, presenting audiences an exhilarating experience through chants, story telling, dance, percussion, and improvisation. Mentored by Grammy-award winning maestro, Bobby McFerrin, Women of the World have also collaborated with powerhouse American songstress Nona Hendryx, African vocal icon Angelique Kidjo, Greek classical artist Mario Frangoulis, and the Boston Pops Orchestra led by maestro conductor Keith Lockhart.

DEKE SHARON, vocal producer of NBC's The Sing-Off and musical director and arranger for the Pitch Perfect trilogy, is creative artistic director of the show.