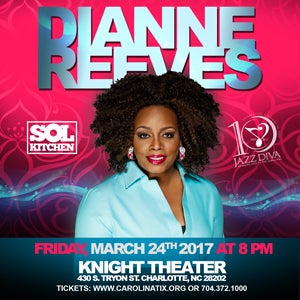 An Evening with Dianne Reeves

Dianne Elizabeth Reeves was born into a musical family in Detroit on October 23, 1956. Her father sang, her mother played trumpet, her uncle is bassist Charles Burrell, and her cousin is George Duke. Although she was born in Detroit, she was raised in Denver. In 1971 she started singing and playing piano.

She was a member of her high school band, and while performing at a convention in Chicago was noticed by trumpeter Clark Terry. She sang with Terry's groups, went to college for a year, and then moved to Los Angeles, where she sang with Stanley Turrentine and Lenny White. She became a member of the jazz fusion group Caldera, then founded another fusion group, Night Flight, with Billy Childs, with whom she would collaborate again in the 1990s. She moved to New York City and from 1983–1986 toured with Harry Belafonte.

She is the winner of the 2015 Grammy for Best Jazz Vocal Album, “Beautiful Life” which showcases Dianne’s sublime gifts in what is a melding of R&B, Latin and pop elements within the framework of 21st Century jazz.

On May 22nd 2015, renowned jazz vocalist, Dianne Reeves, was recognized by the Juilliard School with an Honorary Doctor of Fine Arts for her “breathtaking virtuosity, improvisational prowess, and unique jazz and R&B style.” She received her award at their 110th Commencement Ceremony in Lincoln Center, along with Suzanne Farrell, Nicholas Hytner, Murray Perahia, and Peter Sellars.