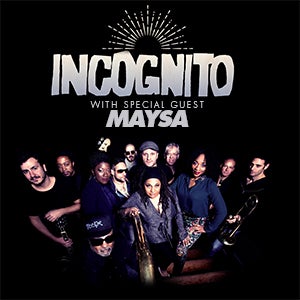 An Evening with Incognito

Incognito is a British acid jazz band. Their debut album, Jazz Funk, was released in 1981.

Incognito was founded by Paul "Tubbs" Williams & Jean-Paul "Bluey" Maunick in 1979 as an offshoot from Light of the World. Light of the World was a substantially sized group and following various changes to the lineup, the founding members Breeze Mckrieth, Kenny Wellington & David Baptiste--inspired by American funk bands such as Funkadelic forming offshoot bands like Parliament --formed Beggar & Co. Bluey & Tubbs went on to form Incognito. However, there has seen a re-connection over the years in Light of the World with various former members, alongside their other commitments.

Incognito has had intermittent success in the UK Singles Chart, with their breakthrough 1991 hit a cover version of the Ronnie Laws tune "Always There", featuring Jocelyn Brown, which made No. 6 in the UK.[1] The group's 1992 single, "Don't You Worry 'bout a Thing" saw similar success, reaching No. 19 in the UK.[1] They have also been a favourite of various re-mixers, including Masters at Work, David Morales, Roger Sanchez and Jazzanova, and have released several albums consisting almost entirely of remixes.

In 1994, Incognito appeared on the Red Hot Organization's compilation album, Stolen Moments: Red Hot + Cool. The album, meant to raise awareness and funds in support of the AIDS epidemic in relation to the African American community, was heralded as 'Album of the Year' by Time magazine. In 1996, the band contributed "Water to Drink" to the AIDS-benefit album Red Hot + Rio, also produced by the Red Hot Organization.

Their song "Need to Know" is the theme song for progressive radio and television news program Democracy Now!.

Maysa Leak (born August 17, 1966) is an American jazz singer better known by her mononym Maysa. She is well known by fans of smooth jazz both for her solo work and for her work with the British band Incognito.

Leak attended Milford Mill High School in western Baltimore County. After high school, she studied music at Morgan State University in Baltimore City and graduated with a degree in classical performance. There she performed as a member of the world famous Morgan State University Choir under the direction of the late Nathan Carter. Leak met performer Stevie Wonder during a college performance.

After receiving her degree from Morgan State University, Maysa headed to Southern California to perform with Stevie Wonder’s female backup group Wonderlove. While with Wonder, Maysa was a vocalist on the Jungle Fever soundtrack, and performed on numerous television shows including The Arsenio Hall Show, Oprah and The Tonight Show.

It was during an over-the-telephone audition in the early 1990s that Maysa became a member of the British jazz/funk/R&B band Incognito and, in 1992, she relocated to London and recorded Tribes, Vibes & Scribes, featuring the hit single "Don't You Worry 'Bout A Thing". Since then, Maysa has appeared on over seven Incognito recordings.