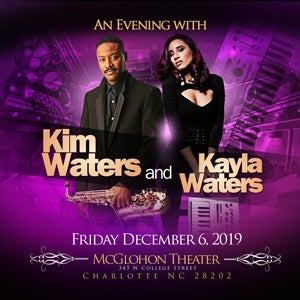 An Evening with Kim and Kayla Waters

KIM WATERS: Saxophonist Kim Waters has made a career of writing timeless anthems with insatiable grooves, undeniable hooks and memorable melodies that combine the best of jazz, R&B, funk and soul. This formula has catapulted him to the top of the charts time and time again and has made him one of the biggest selling saxophonist to date. JazzTimes Magazine has declared, "Waters is simply one of the planet's best saxophonist, instantly recognizable for his keen melodic sensibilities and soulful approach to his saxophone, The Washington Post has likened Waters to "A romantic pied piper out on a long evening stroll." The prolific saxophonist, composer, and producer has enjoyed a career of longevity that is rare. Waters' Zen-like approach to his life and artistry is simple. "My motto is to try and live in a way where I am not stressing about anything. What's going to be is going to be.

KAYLA WATERS: Pianist, singer, and composer Kayla Waters is an ebullient, classically trained, crossover jazz performer. Born into a musical family, Waters was introduced to music via her father, acclaimed smooth jazz saxophonist Kim Waters. From the age of six, she studied classical piano and eventually earned her Bachelor of Music in Piano Performance from Howard University. As a performer, she made her debut playing on several of her father's albums before launching her own career. She has also shared the stage with a bevy of luminaries including Patrice Rushen, Maysa, Stevie Wonder, and others. Along with her performance career, Waters works as Director of Music and Worship at Mount Vernon Place United Methodist Church in Washington, D.C. and holds the position of Music Director of the Howard University Early Learning Program. In 2017, she released her debut full-length album, Apogee, on Trippin N' Rhythm Records, featuring the single "I Am." Led by the single, "Zephyr," Waters returned in 2018 with her follow-up album, Coevolve.