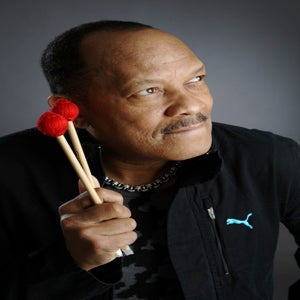 An Evening with Roy Ayers

Ayers was born in Los Angeles, California, and grew up in a musical family At the age of five, Lionel Hampton gave him his first pair of vibraphone mallets. The area of Los Angeles that Ayers grew up in, now known as "South Central", but then known as "South Park", was the epicenter of the Southern California Black Music Scene. The schools Roy attended (Wadsworth Elementary, Nevins Middle School, and Thomas Jefferson High School) were all close to the famed Central Avenue, Los Angeles' equivalent of Harlem's Lenox Avenue and Chicago's State Street. Roy would likely have been exposed to music as it not only emanated from the many nightclubs and bars in the area, but also poured out of many of the homes where the musicians who kept the scene alive lived in and around Central. His high school, Thomas Jefferson High School, produced some of the most talented new musicians, such as Dexter Gordon.


Ayers was responsible for the highly regarded soundtrack to Jack Hill's 1973 blaxploitation film Coffy, which starred Pam Grier. He later moved from a jazz-funk sound to R&B, as seen on Mystic Voyage, which featured the songs "Evolution" and the underground disco hit "Brother Green (The Disco King)", as well as the title track from his 1976 album Everybody Loves the Sunshine.


In 1977, Ayers produced an album by the group RAMP, Come Into Knowledge, commonly and mistakenly thought to stand for "Roy Ayers Music Project"& had his biggest hit with "Running Away". In late 1979, he scored his first top ten single on Billboard's Hot Disco/Dance chart with "Don't Stop The Feeling," which was also the leadoff single from his 1980 album "No Stranger to Love", whose title track was sampled in Jill Scott's 2001 song "Watching Me" from her debut album "Who Is Jill Scott?"


He's worked with many superstar musicians such as Fela Kuti & John "Jellybean" Benitez just to name a few.


It is indeed a pleasure to have such a "Legend In Music" come to Charlotte, NC