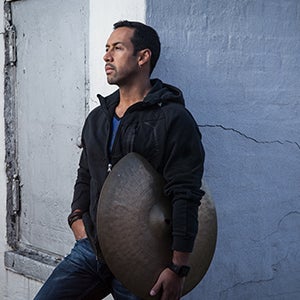 The visually stunning 2015 Oscar winner for Best Picture by maverick director Alejandro Inarritu stars Michael Keaton as a washed-up action star trying to reinvent his career as a credible actor and director on the Broadway stage. For this special performance, the film will be accompanied live by renowned jazz drummer Antonio Sanchez, recreating his explosive, Golden Globe-nominated score that provides the heartbeat of the film.

With a supporting cast that includes Edward Norton, Naomi Watts, Zach Galifianakis and Emma Stone, Birdman: Or (The Unexpected Virtue of Ignorance) is a kinetic film experience that plays like a single, continuous sequence of events, with Sanchez’s drums supplying the energy and drive that underlines the emotional weight of the story and perfectly expresses the restless, desperate intensity of the characters.

Antonio Sanchez is one of the most accomplished and in-demand drummers in jazz, performing regularly with a jaw-dropping  list of greats including Gary Burton, Chick Corea, Danilo Perez, David Sanchez, Miguel Zenon, Donny McCaslin and Michael Brecker. Since 2000, he has been the drummer of choice for 20-time GRAMMY winning guitar God Pat Metheny, touring the world and appearing on eight acclaimed recordings with the guitarist. Sanchez has released four albums as a leader, including the new recording with his Migration band, The Meridian Suite.

“A triumph on every creative level” – Variety

“Mr. Sanchez emerged as one of the standout jazz drummers on the contemporary scene, a polyrhythmic ace attuned to the subtlest dynamic fluctuations” – The New York Times