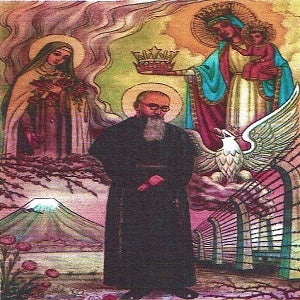 Birth of a Saint

Robert Wayne Hudack wrote the screenplay, music and lyrics for “Birth of a Saint”, based on the book, “The Life of Saint Maximilian Kolbe, Apostle of Mass Communications” by William LaMay.

The musical, as does the book, narrates the life of St. Maximilian Kolbe and his journey to sainthood, which includes an apparition of the Blessed Mother, his path to religious vocation and his ultimate sacrifice, thus becoming an icon of Christian life and love.

The musical will be staged in three acts with eight original songs composed by Robert Hudack. Rob has composed the music for the musicals “Lost Angeles” and  “City of the Lost Angel”, as well as the film score for the documentary, “Young Eagle, Distant Thunder”.