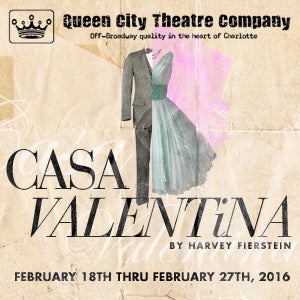 From four-time Tony Award® winner Harvey Fierstein (Kinky Boots, Newsies, La Cage aux Folles) comes CASA VALENTINA, his first play in almost thirty years! A hilarious, groundbreaking and touching new comedy based on a true story that will delight audiences in its Charlotte and regional premiere with an award winning cast under the direction of Glenn T. Griffin.

Back in 1962, most men went to the Catskill Mountains to escape the summer heat, but others took the two-hour drive to escape something else entirely: being men. Nestled in the land of dirty dancing and borscht belt comedy sat an inconspicuous bungalow colony that catered to a very special clientele: heterosexual men whose favorite pastime was dressing and acting as women. It was paradise for these men—white-collar professionals with families—to spend their weekends discreetly and safely inhabiting their chosen female alter egos.

Infused with Fierstein’s trademark wit, this moving, insightful and delightfully entertaining new work offers a glimpse into the lives of a group of unforgettable characters as they search for acceptance and happiness in their very own Garden of Eden.

Welcome to the world of self-made women. Welcome to Casa Valentina.

Recommended ages teens and up