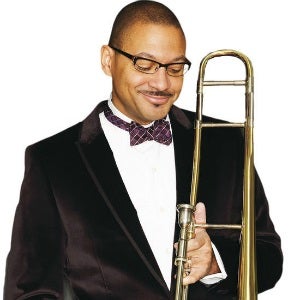 Delfeayo Marsalis is one of the top trombonists, composers and producers in jazz today. Known for his “technical excellence, inventive mind and frequent touches of humor…” (Leonard Feather, Los Angeles Times), he is “…one of the best, most imaginative and musical of the trombonists of his generation.” (Philip Elwood, San Francisco Examiner.) In January 2011, Delfeayo and the Marsalis family (father Ellis and brothers Branford, Wynton and Jason) earned the nation’s highest jazz honor – a National Endowment for the Arts Jazz Masters Award.

Duke Ellington is a composer, pianist and bandleader, Ellington led his orchestra from 1923 until his death in 1974, a career spanning over 50 years. Ellington’s reputation has increased since his death, with thematic repackagings of his signature music often becoming best-sellers. Posthumous recognition of his work include a special award citation from the Pulitzer Prize Board.  “In jazz he was a giant among giants. And in twentieth century music, he may yet one day be recognized as one of the half-dozen greatest masters of our time.” -Gunther Schuller

This special Jazz Appreciation Month Celebration will kick off JAI’s JAZZ ROOM Series- Season 5. The remaining Season 5 shows will take place on the third Friday of each month and feature two sets (6:00PM & 8:15PM) as the Charlotte region’s most gifted musicians recreate the music of jazz masters like Miles Davis, Dave Brubeck and Billie Holiday. The Jazz Room @ The Stage Door Theater provides a casual and intimate setting with tables and a full bar, reminiscent of the classic jazz rooms of yesteryear.