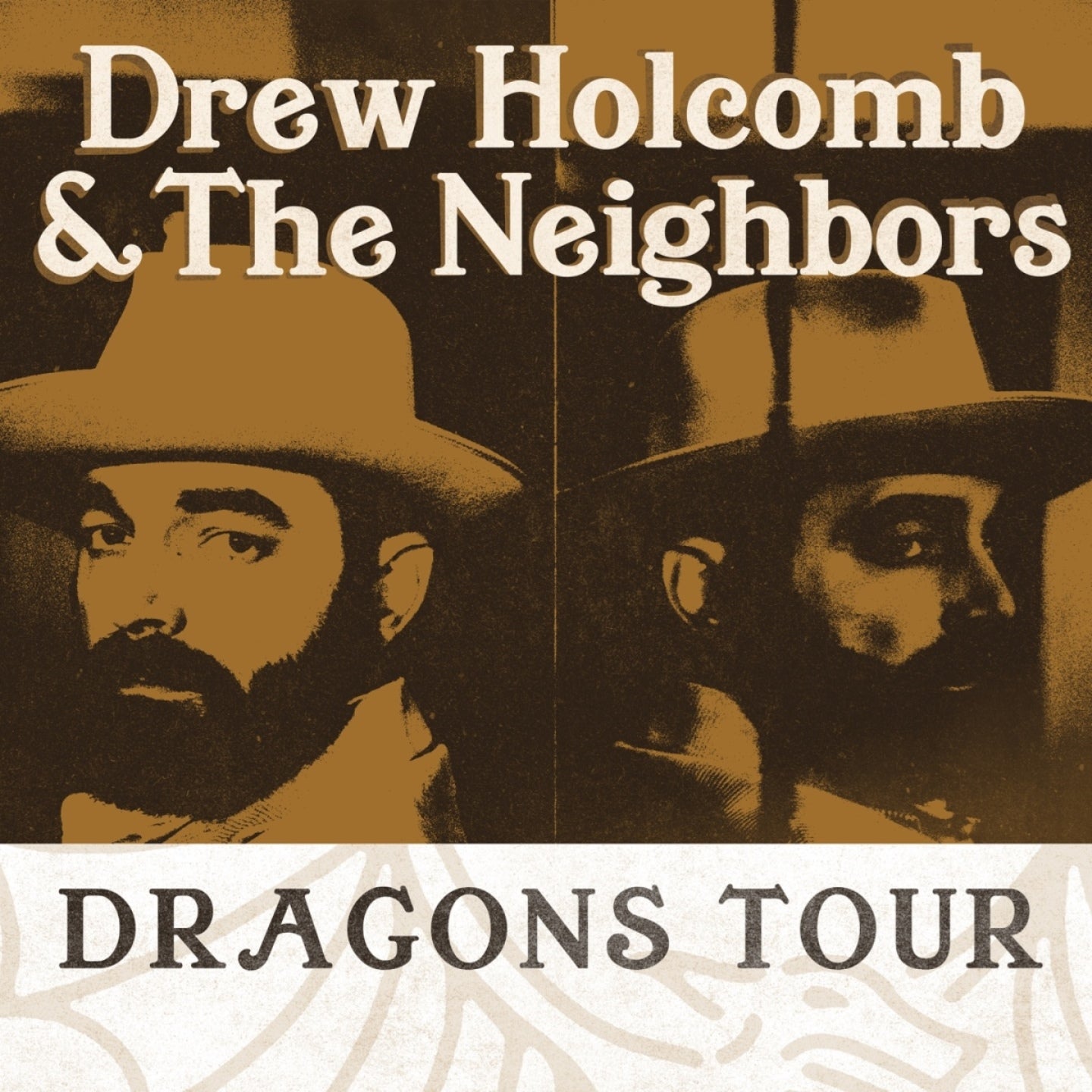 Drew Holcomb’s songs have always charged his listeners’ hearts and minds while inspiring them to think, feel, dance, and love. But with his new album, Dragons, his subject material finds the singer using a finer brush and mixing more of the joys, struggles, and specific moments of his own life than ever before to help him paint his masterpieces and connect with fans on a universal level. With its modern production, careful sense of craft and collaboration, and rafter-reaching anthems carrying profound, intentional lyrics, the album represents Drew Holcomb and The Neighbors’s biggest moment yet, a powerful portrait stretched across a wide sonic canvas.

The story of Dragons is the culmination of myriad events, connections, challenges, and years of hard, determined work for Holcomb, both as a bandleader and a family man. For the last decade, the Tennessee-based musician has established himself as one of Americana and Southern roots music’s freshest upstarts, building his following and critical appeal with every release, show, and venture. From his position as curator and entrepreneur with various undertakings—from co-creator of the successful, diverse Moon River Music Festival that makes its sold-out home in Chattanooga this Fall, to the Magnolia Record Club vinyl subscription program that he founded and curates on a monthly basis—to his role of husband for the last 14 years and father to three children, Holcomb cites the nature of his life of late as equal parts “collaborative” and “chaotic.” Having released a full-length Neighbors album, Souvenir, in 2017 to much acclaim, a co-released EP with Johnnyswim, Goodbye Road, in 2018, enjoyed the stripped-down and mostly sold-out “You & Me” tour with his wife, singer Ellie Holcomb, in 2018 and early 2019, and opened larger shows for Willie Nelson and the Zac Brown Band with The Neighbors, Holcomb’s legend and reach continues to grow. So when it came time to begin work on a new album, he forced himself to try something different and to mine untapped territory—and in a manner he had never before attempted.

As Holcomb embarked on the tour for Souvenir in 2017, he disciplined himself to write new songs in a more consistent manner than his past efforts. Where his previous work was written more in lump sum moments during specific blocks of time set aside for creative outburst, he found that spending two to three days each week with his guitar in hand and working on new material yielded better results in both quantity and diversity. Inspired to “throw off some self-imposed shackles” in terms of subject matter and style, the new material was shaping up to point him in an altogether new and exciting direction—and perhaps because he had opened himself up to writing while his “normal” life was rolling along, the songs began to take on a more intimate point of view.

To assist him with the scope of the challenge, Holcomb turned to his friends and peers for collaboration—in fact, six of Dragons’s ten songs are co-writes. Even though he was writing about his own unique experiences, Holcomb discovered that the support of other trusted ears and hearts proved valuable beyond his estimation. From working with the legendary Lori McKenna on several songs and country songwriting star Natalie Hemby on another, to previous tourmate Sean McConnell as well as Zach Williams of The Lone Bellow, Holcomb learned how to reap the benefits of sharing without being territorial while ultimately serving his own vision for the pieces at large. He also co-wrote the song “Bittersweet” with producer and songwriter Cason Cooley (Ingrid Michaelson, American Authors), loving the process and result so much that he invited Cooley to produce the entire album.

Cooley took Holcomb and the Neighbors to the esteemed Echo Mountain studio in Asheville, North Carolina, to record in January of 2019. They shared a vision for the finished album that would give it a more modern sound than Holcomb’s previous recordings, with his songs balancing the line of large, layered anthems with nuanced singer-songwriter moments—or, as he says, “expanding the emotional architecture of the songs so that the bigger themes and emotions would have space to hit harder.” Having always allowed his band—including Rich Brinsfield on bass, Nathan Dugger on guitar, and session drummer Will Sayles—to play by its own rules, Holcomb and company again embraced that ethos and remained open-minded for the inclusion of any instrument, tweak, technique, or style as long as it served the human element and earnest feeling of each song. Several were tracked live with minimal studio tweaking occurring afterwards, and others were built over time with a more fastidious approach. The result is Holcomb’s brightest and most complex album yet, a focused and cohesive affair that challenges the sonic notions of where his music can travel while still connecting directly to his listeners’ hearts.

Dragons begins with “Family,” an infectious, upbeat stomper about the universal yet unique nostalgia of growing up, as told through the reflective lens of fatherhood. “My family gave me wings to be a songwriter,” Holcomb says. “Family can drive you crazy but it can also be the tie that binds.” A staple in the band’s live set for the past year, it originally had more of a front porch feel but evolved into its worldly, amped-up Paul Simon-esque version during the recording process. Next, “End of the World” is an electrified clarion call for unity, community, and revelry in the upside-down world of today—Holcomb’s take on eat, drink, and be merry, for tomorrow you die. “Sometimes throwing a party is the only way to fight off the darkness, and I wanted it to be an epic, boisterous, raise-your-glass-and-yell-with-me anthem,” he says. The song forced him out of his comfort zone and stretches him to new vocal and melodic heights, resulting in one of the most rewarding moments of his career to date.

A similar triumph from a different corner of his soul is “You Never Leave My Heart,” a touching and tender daydream filled with sadness that Holcomb wrote right after the New Year about the death of his brother nearly 20 years ago. For most of that time he had been unable to write in a way that captured the full scope of grief and emotional loss, but last January he found the right words and sings them through the most intense and sublime vocal performance of his career, leaving every piece of his heart on the studio floor in the process. Meanwhile, songs for his son and wife, “See the World” and “But I’ll Never Forget the Way You Make Me Feel,” showcase a similarly sensitive approach, highlighted by Holcomb’s knack for multi-level details and his ability to share the intimate moments of his most meaningful relationships in a universal way.

But the album’s true heart is its eponymous song, “Dragons,” a strong, vibrant tune about wrestling down the various roles we all play while living a life filled with love and pride. Inspired by Holcomb’s grandfather, a larger-than-life personality who embodied the spirit of living to his peak until his final days, the song imagines his ghost-like return to visit Holcomb in a dream. It is a bombastic number about bearing witness to the truth and justice the world lacks, despite not knowing what tomorrow might bring. And while searching for a title for the entire record, Holcomb recognized the song’s bigger implications and realized how its message exemplifies the larger work.

“A big part of this record for me was about taking stock of the many roles I play and synthesizing them into the emotions of these songs,” Holcomb says. “I’ve made peace with the fact that I live a pretty normal life—I’ve got a happy marriage, healthy kids, a job I enjoy immensely—and yet still I’m reminded of the quote: ‘Always be kind, for everyone you meet is fighting a great battle.’ Everybody is trying to fight their way through some sort of hell; people wake up every morning and there are dragons they have to slay that day. What I’ve learned is that music is here to help us overcome and get through life and survive those moments.”

For Drew Holcomb, music is what helps us try to understand our place in a world full of equal parts chaos, confusion, love, and community, and Dragons is his reminder to all of us to keep fighting the good fight and to never give up.

Zack and Dani were married in 2012 and soon after their wedding tried writing a couple songs together. They liked it, so they wrote a couple more. Andy, a friend from college and very talented drummer, was into the songs and started beating on stuff while Zack and Dani played them. It sounded good. While these 3 were playing the songs at Shakespeare in the Park one August afternoon, Brian became interested in adding his immense talent to the mix as well and began playing along with mandolin and guitar. It sounded even better. Birdtalker as these 4 members wrote and practiced for about a year when yet another talented friend and Birdtalker's biggest fan, Jesse, expressed interest in lending his bass sounds to the band. It is the combination of each member's specific offerings that gives Birdtalker the life and sound that it now possesses. And it doesn't hurt that they all like each other a heck of a lot, too.

Zack and Dani write songs as a way to share ideas they care about and sentiments they feel deeply. Playing music has proven to be a powerful avenue for connection and communion, within the band as well as with listeners. Birdtalker's hope is simply that the more music they write and share, the more true and vulnerable interactions may be born from it.