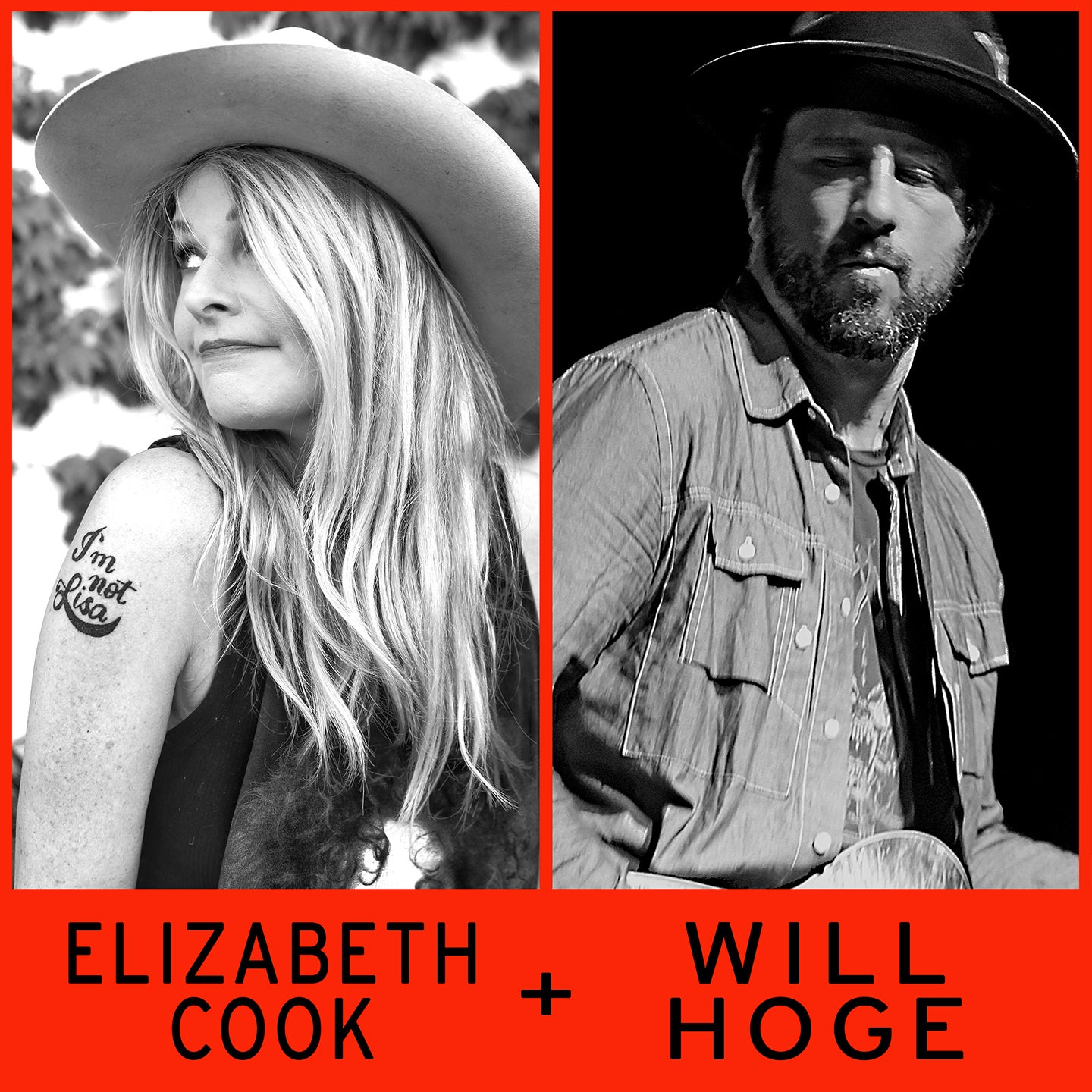 Elizabeth Cook is a Nashville-based Singer Songwriter from Wildwood, Florida. As a critically acclaimed live act and recording artist, the New York Times lauds her “a sharp and surprising country singer”. A veteran SiriusXM Outlaw Country Radio DJ, hosting her own show, Apron Strings, nationwide for the last 10 years, she is also a favorite of David Letterman, a regular performer on the Grand Ole Opry, and a frequent guest star on Adult Swim’s long-running hit cartoon series “Squidbillies” on Cartoon Network.
In the words of the Drivin’ and Cryin’s legendary Kevn Kinney, “Elizabeth is so far ahead and under the radar you better have a supercharger for that fastback if you’re going to catch up! Enjoy the ride…”

“Will Hoge didn’t really need to release a new album in 2018. His most recent, Anchors, came out last August, reaching No. 6 on Billboard Heatseekers and the Top 20 on the Indie chart. He’d toured the United States and Europe, and could’ve settled in from there. But there was something he couldn’t stop thinking about: his children.

Border police. Political corruption. Anti-intellectualism. Poverty. Gun control. A broken education system. Indifference to others’ suffering. Each of these things weighed on Hoge, and he confronts them all head-on in My American Dream, which will come with a copy of the U.S. Constitution printed with the lyrics in both the LP and CD (out October 5th on Edlo/Thirty Tigers).

“Those things kept me up at night — and this record was less expensive than therapy,” he says, laughing. “Silence couldn’t be a part of my deal anymore.” and Hoge dealt with his fears the only way he knows how, by making music. The result is the fiercest, angriest, and most heartfelt collection of songs he’s released. Eight songs of rabble-rousing political commentary that turns a critical eye on the crisis of conscience and culture threatening to tear apart his country, the album is Hoge’s impassioned portrait of what he holds dear — and what we all might risk losing.

“My kids and their future, that’s the biggest thing for me. My boys are 11 and 7, they’re happy and healthy kids, and I feel lucky for that every day,” says Hoge, who’s wife is a teacher at the same school that their sons attend in Nashville, Tennessee. “Every morning at 7 o’clock, everything I care about in the world goes to one building. It takes one knucklehead with a gun going into that one building to ruin all that for me.”

The first song that Hoge completed was inspired directly by the specter of school shootings and the inept response of politicians: “Thoughts & Prayers” (released as a single and named as one of the Top 25 Songs of 2017 by Rolling Stone Country) is an acoustic ballad in which he asks, “Why don’t you do your job up there? Keep your thoughts and prayers.” “Sadly, it seems that “thoughts and prayers” is America’s new slogan” says RS. It’s a raw, fiery song with just Hoge and his guitar, belting out his frustrations in the recording booth. Production wise, It’s a stark contrast to the straight, no-holds-barred rock and roll of the rest of the album, though the inextinguishable spirit remains the same throughout and the urgency of the music comes through in every note.

“Well another group of kids in high school dead

People marching in the streets trying to find a little peace

Listen to the thumping beat of “Nikki’s a Republican Now” or the crunchy solidarity of “Stupid Kids” and it’s clear Hoge feels the release of cranking the amps up to 11. Hoge credits the big rock sound on My American Dream, to the red hot playing of his touring band and the intense angst caused by what’s happening in our country. With Will in the producers chair, he along with Thom Donavan (lead guitar), Chris Griffiths (bass) and Allen Jones (drums) hunkered down in Studio B at Nashville’s historic Sound Emporium and knocked out the entire album in just 3 days. He then enlisted long time trusted collaborator and Grammy Award winning engineer, Ray Kennedy, to handle the final mixes.

Hoge has never been afraid to wade into political territory, like with 2004’s The America EP (“Bible Vs. Gun,” “Hey Mr. President (Anyone But You)”) or 2012’s Modern American Protest Music (“Ballad of Trayvon Martin,” “Jesus Came to Tennessee”) and the point of this new material is to continue to push Hoge — and his listeners — even further outside of the comfort zone. That meant coming to terms with parts of his own past that he wasn’t proud of. When speaking about the song “Still a Southern Man”, Hoge notes “I grew up in a town where the high school mascot, the Franklin Rebels, had a rebel flag. I was the guy that brought the rebel flag to football games. I thought it was awesome because it was our school,” he remembers. “I was a dumb, small-town, sheltered kid. It never entered my mind that this was racist because I wasn’t racist, so how could this be wrong? I never considered the dark history, It was just a mascot to me, I realized later It was a long, awful nightmare to many others.”

More often than not, though, Hoge puts himself in someone else’s shoes, be it the homeless heartland worker who watched his job prospects head overseas on “My American Dream” or the Mexican immigrant crossing the border to provide for his family on “Illegal Line.” At their core, both songs are about empathy. “At the end of the day, that’s really what folks are after, is just to be treated with some respect. Paired back to back, “My American Dream” and “Illegal Line” form the emotional core of the album, with the latter song taking on all the more significance in light of the heartbreaking separation of families so tragically revealed in the 24-hour news cycle.

He’s grateful for the commercial success and Grammy nominations that songs such as “Even if It Breaks Your Heart” “Middle of America” and “Strong” have received, but even more important than the commercial success is the freedom to stand up for his convictions and put them into his music when the time calls for it. ”If I’m going to alienate folks then I guess it’s doing its job. If they aren’t willing to be challenged, if they don’t like the songs, then don’t buy the record. It’s that simple.”

What’s more, Hoge isn’t the type to talk the talk without walking the walk. He’s an avid activist, lending his time and resources to raise awareness and money for Believe in Service (a Nashville based PAC who supports candidates in 8 key Senate races) and is a member of Everytown for Gun Safety’s Music Council, a part of the Creative Council, founded and chaired by Julianne Moore. His social media pages are a microcosm of sorts for the wider conversations taking place in the world today, as he challenges his fans to not shy away from the important questions that need to be asked.

With My American Dream, Hoge hopes that others will follow his lead, see the world through someone else’s eyes, and maybe — just maybe — begin to fix the mess we’re living in.