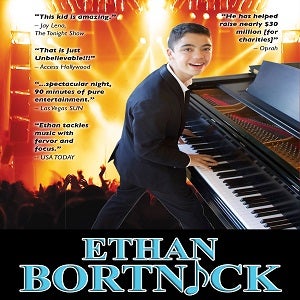 Ethan Bortnick: The Power of Music

Recognized by the Guinness World Records as “The World’s Youngest Solo Musician to Headline His Own Concert Tour,” 14-year-old Ethan Bortnick has been performing around the world, raising over $30,000,000 for charities across the globe. Ethan has also been featured on countless national television shows, including multiple appearances on The Tonight Show with Jay Leno, Good Morning America and Oprah.
His highly successful nationally televised TV show, The Power of Music, has been one of the most successful concert pledge shows on PBS for 2014, and is still running nationwidecontinuously, winning multiple awards. Ethan also recently graced Esquire magazine's cover, was featured in Gap's celebrity ad campaign, and stars in multiple Public Television TV shows across the country; now this pianist, singer, composer, and captivating entertainer is bringing the house down once again as he takes his THE POWER OF MUSIC concert on tour.
Ethan's THE POWER OF MUSIC concerts are filled with surprises and talent that dazzle audiences and fill them with a sense of wonder and awe. People leave Ethan's shows feeling elated, transformed, uplifted, and inspired, saying it was the best show they have ever been to, hands down. Audiences around the world have laughed, cried, sang, danced, and experienced some of their most exciting and memorable moments at Ethan's shows. This is a must see for the entire family!
Also joining Ethan on stage is his band, a children's choir, local guest artists and maybe even YOU!