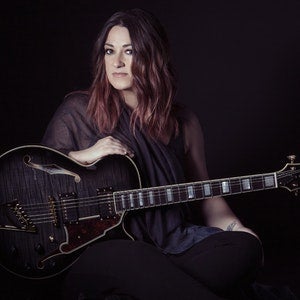 Jennifer Knapp has experienced enough chaos and turmoil in her life that she could write about it on every album. Instead, she made Love Comes Back Around, a collection of songs that focus on what really matters.

Produced by Viktor Krauss, Knapp’s latest features 10 compelling new tunes exploring love — but not the easy kind. These are love songs for grown-ups who have come a few miles. “It’s not just sex, it’s not just physical relationships,” Knapp says. “It’s hard work. It’s loss, it’s forgiveness, it’s a lot of things wrapped up in one.”

Love Comes Back Around pairs her fearless songwriting and strong, expressive voice with rootsy arrangements: there’s growling guitar and a snakey beat on opener “Straight Road,” subtle horns layered into the background on “Perfect Pardon” and the mournful interplay of piano and acoustic guitar on “Roll Over Me.” Knapp’s vocals are the centerpiece of the title track, which she says is “a look at the mundane things in our lives, between who makes the bed and who doesn’t, and what makes you miss your partner when she’s gone.” In other words, the real stuff.

Knapp knows plenty about that. Love Comes Back Around is her sixth album in a music career with two distinct sections. After releasing three contemporary Christian albums in the late ’90s and early 2000s, she took a long break from music and moved to Australia before resuming her career in 2009. The following year, she came out as gay and released Letting Go, her first mainstream album. Set Me Free followed in 2014, in conjunction with a memoir, Facing the Music: My Story on Howard Books/Simon & Schuster.

“At this point in my life, I’ve been in a relationship for well over a decade, I’ve had a public controversy and had to weather the storm over my sexual orientation in public, I’ve had to deal with what my faith does or doesn’t mean to my music,” Knapp says. After all that, she was ready to focus on something else. “I started thinking about a universal approach to what love is, and not just the sappy part.”

Knapp’s return to music included moving back to Nashville, where she was based earlier in her career. “I’ve experienced Nashville in two ways,” she says. “At the heart of my stardom, so to speak, when things were really busy and I toured a lot, the irony was that even though I made my home here and worked professionally here, I wasn’t home enough to enjoy the camaraderie.”

This time around, she’s home enough to have become part of a creative community. That’s how she connected with Krauss: friends of Knapp’s who knew the producer’s work recommended him. After Knapp listened, she invited Krauss out for ice cream and asked him to work with her on Love Comes Back Around.

“If you don’t deliver music that creates the emotional space to dive into the lyrics, a lot of the subtlety is lost, and Viktor really understands that,” Knapp says. “He’s seen everything and played with everybody and has all these phone numbers, but he’s actually really humble and sincere, and that allows an artist like me to have confidence in my own work.”

When she’s not occupied with music, or doing advocacy work on behalf of LGBTQ people of faith through her Inside Out Faith organization, Knapp is working on a master’s degree in theological studies at Vanderbilt Divinity School. It’s not what she thought she’d be doing now when she was a young singer first starting out, but life has a way of carving its own unexpected path — and so does love.