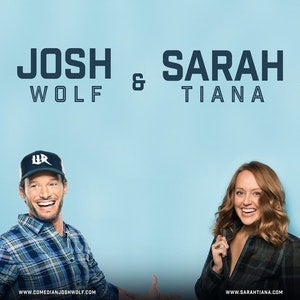 Josh Wolf is a comedian, actor and NY Times Bestselling author best known for his work as a round table guest and writer on E!’s “Chelsea Lately” and “After Lately.” He has become one of the most sought after personalities in comedy, headlining stand up comedy tours across the nation. Wolf grew up in Amherst, Massachusetts and began performing stand up at 15 years old. After moving to Los Angeles in his mid 20s, Josh landed a talent deal with 20th Century Fox and series deals with ABC and NBC. These deals were based on his real-life story of having a relationship with a woman who had two kids prior to meeting him and then having another with Josh and waking up one day to tell him she had no desire to be a mother; leaving Josh who was approx. 24 years old to figure how to raise three toddlers alone all the while trying to forge a career as a standup comedian.

Other credits were writing for “Yes, Dear”, “All of Us,” and “Cuts.” In 2006, Wolf returned to television in front of the camera, appearing on the 4th season of “Last Comic Standing,” and recurring on “My Name is Earl.” Throughout 2013-2014, Wolf hosted “Shark After Dark” which aired during the ultra-popular “Shark Week” on The Discovery Channel. This led to Josh being cast as the host for Discovery’s late night series “Naked and Afraid.” In 2015, Wolf hosted CMT’s first original late night comedy series, “The Josh Wolf Show.” Josh currently lives in Los Angeles with his wife and kids.

These are the things you know about Sarah Tiana.

But what you don’t know is that Sarah Tiana has been a “working” comedian/ex-waitress in Los Angeles since 2003.

Originally from Calhoun, GA, Sarah's act emphasizes the thrills of growing up after “The War Of Northern Aggression” and trying to survive in the current battle of the sexes. She doesn’t call herself “single,” (she’s too old for that), she prefers to be called “sexually active.”

Sarah’s big break came after she was recognized for her "breakout performance" as Carmen in four episodes of Reno 911!'s 7th season. In 2005, she helped create a sketch comedy company called The Strait Jacket Society as a way to help young actors in Hollywood accelerate their stage time and gain exposure while still having fun (she has currently put over 500 actors through the program).

A downright ‘Merican, Sarah has done over 12 tours of comedy for the troops including Germany, Singapore, Afghanistan, Guam, Okinawa, and several Wounded Warrior Facilities. A trip to Iraq at the beginning of the war is highlighted in the documentary film, "We Love You Mrs. Bevins.” She has been a correspondent on “The Soup Investigates” as well as “Love You, Mean It” starring Whitney Cummings.

An avid sports fan, Sarah wrote for the ESPY awards and the Rob Riggle NFL segments on FOX. She can be seen at The World Famous Comedy Store, Twitter, and numerous unhealthy relationships in and around Los Angeles. She will never be seen in the three pilots she taped last year or be caught dead in the dress she wore on Craig Ferguson (it no longer fits).