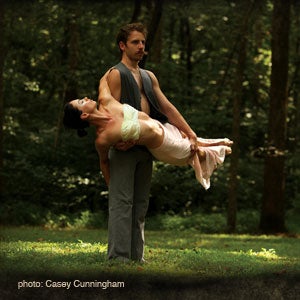 Moving Poets From The Depths

De Profundis previously premiered in 2001 at the Booth Playhouse. Based on Wilde’s prison writings, De Profundis depicts his prison trials brought on by the extreme intolerance of homosexuality during his era. Sadly, Wilde’s brilliantly talented life ended shortly after his release from prison. The performance will be accompanied by the ingenious percussive beats of Daveed Korup with David Crowe.

Usually Strange, Moving Poets’ newest world premiere, will also be creatively spun from the writings of Wilde. This wildly inventive work has been co-created by Moving Poets’ artistic directors Sarah Emery (Charlotte) and Till Schmidt-Rimpler (Berlin). Other prolific collaborators include musician and composer David Crowe, mixed media artist, Jason Watson and a surprise and sorely missed group of Charlotte actors.”