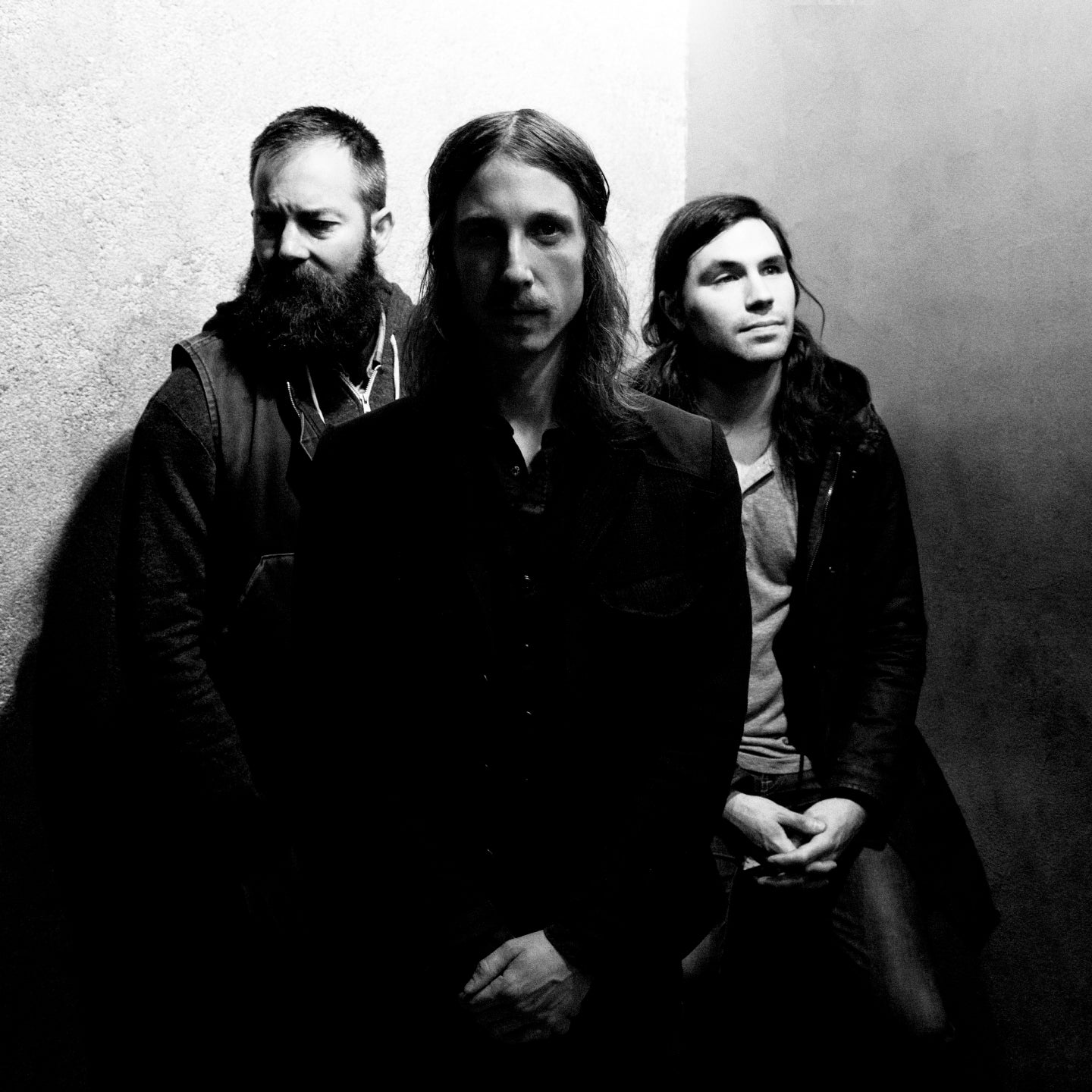 "Their newest release, Guidance, is yet another prophetic portrait conjuring apocalyptic dimensions in the minds of those who listen." - Exclaim!

“Guidance is not only Russian Circles' best album yet, but a standard-bearer for heavy, guitar-based instrumental music. Over ten years into their career now, Russian Circles may not need to prove anything, but with Guidance, they absolutely have.” - The 405


At the end of 2014, Chicago trio Russian Circles celebrated the10-year anniversary of their first show. A decade is a long time for any band to persevere, let alone a band that mines the relatively unmarketable niche of protracted instrumental dirges. But whereas many bands on the louder end of the rock-based instrumental world are content to work within the confines of the crescendos and washed-out timbres laid out by their predecessors, Russian Circles persistently expand their creative boundaries by working with a wider swath of sounds and structures. In many ways, their last album Memorial was a fitting cap to that first decade; it was an elegy to the past, a token of remembrance to the aural explorations of the band’s formative years. It encompassed the many facets of the band’s catalog: harrowing gloom, cinematic majesty, primitive bludgeonings, bittersweet dexterity, and morose minimalism.

With their sixth album Guidance, Russian Circles carry on in their quest to conjure multi-dimensional dramatic instrumental narratives and to scout out new textures from their respective instruments. Songs aren’t constructed out of highbrow concepts; they’re forged out of gut instinct and base emotional response. Nor was the band—as is often the case with artists later in their career—interested in testing their fans’ patience or securing a new broader audience with a radical reinvention. Instead, Russian Circles use Guidance to continue examining the polarity of quiet and loud, complexity and simplicity, ugliness and beauty. Every Russian Circles album has had its share of new sonic vistas, and Guidance finds the band still searching out new sounds while continuing to play to the collective strengths of guitarist Mike Sullivan, drummer Dave Turncrantz, and bassist Brian Cook. Starting with the meditative restraint of album opener “Asa”, Guidance sets off on a path of metallic savagery (“Vorel”, “Calla”), arpeggio tectonics (“Mota”), mercurial anthems (“Afrika”), somber segues (“Overboard”), and seismic Americana noir (“Lisboa”). With the help of engineer/co-producer Kurt Ballou and his God City Studio, Russian Circles were able to capture this broad tonal palette and wide array of emotional motifs into a cohesive journey through the tumultuous corners of human existence.

We often expect artists to fall into patterns and formulas, but for Russian Circles the creative method is still a mystery. Songs develop at their own pace. Inspiration comes from strange sources. If anything, the process of writing is every bit the enigma it was back when the band crafted their first song in 2004. Life itself is a struggle with the unknown and a search for meaning, and the creative process for Russian Circles has mirrored that pursuit. The radical dynamic shifts and straightforward production of Enter, the lockstep metallic attack and pensive comedowns of Station, the symphonic grandeur of Geneva, the grit and grime of Empros, and the oscillation between melancholy and wrath on Memorial were all incremental steps towards an ideal, and Guidance brings the band that much closer to that realization. In the interim between albums, a veteran handed off an envelope of war photos to the spouse of a band member. The photos depicted a man being led to his execution. There was no context for the traumatic scenes, no history, no background. Yet the dignity this anonymous figure exuded in his fatalistic march resonated with the band. Here was someone that knew his fate and marched boldly towards his destiny. The band used these photos for the Guidance album art, knowing that we all march towards our own conclusions, and we can only hope that we face our futures with the same honor and nobility. If the band’s fourth album Empros (Greek translation: Onward) was a statement of perseverance, Guidancebecame a statement of striding into the future undeterred by what lies ahead.

Guidance comes out August 5th on Sargent House. The album is available on vinyl and CD, as well in all standard digital formats.

“On its sixth album, instrumental power trio Russian Circles prove once again that you don’t need a vocalist to make powerful, affecting rock music. Recorded by Converge guitarist Kurt Ballou, Guidance sees guitarist Mike Sullivan, bassist Brian Cook and drummer Dave Turncrantz at the height of their considerable powers. From the pastoral, fingerpicked delicacy of opener “Asa” and almost black metal-style tremolo melodies of “Vorel” to the soaring post-rock guitars of “Afrika” and the booming psychodrama of “Calla,” Russian Circles deliver seven glorious cuts of cinematic elegance and regal thunder. Not to mention what might be its best album yet.” - Revolver, 4/5

"Russian Circles have risen to become one of America's preeminent loud-as-hell bands, decadent in texture and volume." - Noisey

For a band who traffic in measured, unhurried riffage, Richmond’s WINDHAND have moved awfully quickly over the last few years. Founded in 2009, the VA quintet have been making waves since the release of their 2010 practice space demo, a two-track CD that garnered the band comparisons to artists like Electric Wizard, The Devil’s Blood, and Black Sabbath. That auspicious start was further realized in March 2012 when the band released their self-titled debut, which quickly became an underground hit and sold out of multiple vinyl presses in a matter of months.

A year later, the band officially signed to Relapse Records. After a steady touring schedule, the band collaborated with Richmond brethren Cough on a split entitled Reflection of the Negative, which was released on Relapse in April 2013. Pitchfork deemed the split WINDHAND’s “best music to date,” and the record’s positive critical reception helped pave the way for WINDHAND to release the highly anticipated album Soma in September 2013. Stereogum, Spin, and the LA Weekly featured Soma prominently on their overall best-of lists. The album was heavily represented in countless metal publications including Revolver, Invisible Oranges, MetalSucks, and Metal Injection. Rolling Stone, NPR, and Pitchfork all took note of Soma as well; the former considered the album the third-best metal release of 2013.

Soma was no flash-in-the-pan internet phenomenon. In 2013 and 2014, the band embarked on a series of support and headlining tours across North America, Europe, and Australia, sharing the stage with the likes of Sleep, High on Fire, Dead Meadow and Kvelertak. In addition, Windhand appeared at major festivals including Roadburn, SXSW, Scion Rock Fest, Day of the Shred and Maryland Deathfest. Windhand also took the time in October 2014 to follow up Soma with a brief two-track Halloween split alongside Swedish doomsters Salem’s Pot (released on Riding Easy Records). Noisey liked the record so much that they declared the band “must have definitely sold their souls for their new split.”

WINDHAND returned in 2015 with their third full-length, Grief’s Infernal Flower, a multifaceted slab of thundering stoner doom that Noisey has called “doom metal’s most anticipated album of the year.” Produced by Jack Endino (Nirvana, High On Fire, Soundgarden, etc), Grief’s Infernal Flower is massive, heavy, and personal, a modern testament to the power of doom and stoner metal’s legacies. One sees the urgency the band have displayed over their career reflected in their music - long-canonized tropes are reimagined and reinvented, Windhand convey an irrepressible sense of motion even within the slowest of songs. Front woman Dorthia Cottrell firmly establishes herself as one of the best vocalists of the genre by perfectly balancing beauty with enormous power, and the twin-guitar attack of Garrett Morris and Asechiah Bogdan weaves together nine songs of perfect riffs and fuzzed-out bliss. That often-delicate splendor is all tempered by the colossal rhythmic mastery of bassist Parker Chandler and drummer Ryan Wolfe, whose lower-register expertise serves as the backbone of the new record. Though the first two WINDHAND albums were underground classics, Grief’s Infernal Flower stands to see WINDHAND cementing themselves as one of the premier metal bands of our time.