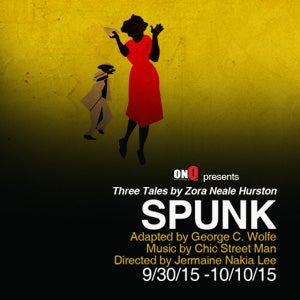 With Zora Neale Hurston's evocative prose and George C. Wolfe's unique theatrical style, they blend to create, Spunk, an evening of theatre that celebrates the human spirit's ability to overcome and endure. Utilizing the blues, choral narrative and dance, the three tales focus on men and women trapped inside the "laughin' kind of lovin' kind of hurtin' kind of pain that comes from being human."

The first of the three tales, SWEAT tells the story of a young washerwoman who is abused and betrayed by her estranged husband, and of her ultimate triumph over him. The second piece, STORY IN HARLEM SLANG, is told in 1940s Harlemese. It is the story of two street lotharios trying to outhustle each other and win the favor of—and a meal from—a domestic on her payday afternoon off. The third tale, THE GILDED SIX BITS, is a bittersweet story of an adoring husband's betrayal by his loving but innocent wife.