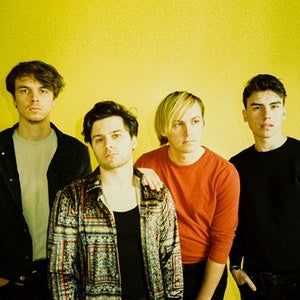 The Jersey boys of the pop-rock outfit The Stolen have come a long way since they were ripping covers of classic rock anthems and Motown tunes at their elementary school’s Fifth Grade Fun Night. The band consists of vocalist/guitarist Dominick Cuce, guitarist Rob Chiarappa, bassist Kevin Smart, and drummer Mike Chiarappa. Before they honed their songwriting skills to craft inviting pop hooks and kinetic guitar melodies, they started off as a group of friends exploring their love of music by learning and performing AC/DC songs together.

Almost 10 years later, after playing countless shows locally, the band released Adults in 2013, which they recorded with producer/engineer Jesse Cannon (Animal Collective, The Misfits). This also marked their first release with bassist Kevin Smart. In 2015, they reached a turning point with the release of their single “Chardonnay,” recorded with producer Paul Levitt (All Time Low, Have Mercy). This began a transition from their pop-punk beginnings to put more focus on their pop sensibilities. Spring of 2016 marked the arrival of their self-released, self-produced EP I’m So Dead, showcasing their shift from a fast, loud pop-punk band to a more groove driven, pop-rock sound. It also landed them recognition from MTV who called the EP “the perfect pop-alt soundtrack to take you into the summer season.” They recorded at Cannon’s New Jersey studio but produced and mixed the album themselves.

Meanwhile, between recording stints, the band continued touring aggressively whether it be self-booked stretches with their peers, touring/performing with acts like Neon Trees, The All American Rejects, The Academic, Jake Miller, Punchline or even following Vans Warped Tour to reach new fans and compete to see who could sell the most CDs and merch. These efforts show the bands perseverance and hustle that they display on and off the road.

Fragile Heart (released May 2017) is the band’s most collaborative effort to date and, once again, done with a DIY mentality with the drums and vocals being predominantly recorded from home. With Fragile Heart, The Stolen have accomplished something that sounds both familiar and comforting with an ’80s pop vibe that is simultaneously young, fresh and new.

Their single “Overboard,” (released Feb 2018) which hit No. 21 on the iTunes Alternative Chart, perfectly illustrates where the band’s sound is going.